What is a talkbox?

Back to: Talkbox Master Class

THIS IS THE BEGINNING OF THE COURSE, DESIGNED TO COVER ALL LEVELS OF STUDENTS.
IF YOU HAVE PREVIOUS EXPERIENCE WITH THE TALKBOX, YOU MAY WISH TO SKIP AHEAD.

If you don’t know what a talkbox is, or have some idea but not a full understanding, let’s start from the beginning.  The talkbox is an effect that allows a musician to affect the sound of their instrument and shape it into actual words, creating the magical sound of a singing guitar or synthesizer.  It is basically just a speaker, with a special fitting to attach a vinyl tube that sends the sound of the instrument to the players mouth.  The sound is then projected from the player’s mouth and shaped into words.  Later in the course we will learn the science of how it really works.

Here are some examples of talkboxes: 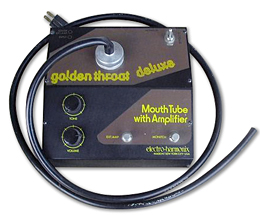 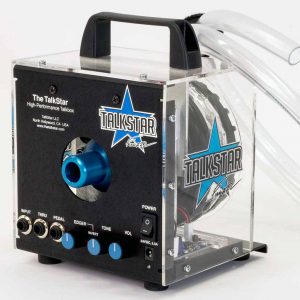 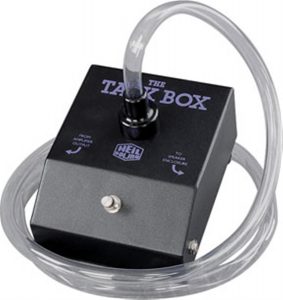 NOTE: The sound of talkbox is often confused for vocoder or the Auto-Tune plugin effect, and we’ll find out later the real differences between the three.

No one is exactly sure who first created a talkbox, but the concept of morphing human speech and musical instruments has been around since 1939 with Avino Rey’s “Singing Guitar” and also a device called the Sonovox. Then in 1963 a country artist named Pete Drake used the first form of a tube-style talkbox on a live TV performance of a song called “Forever” with a lap steel guitar.  Later in 1969 rock guitarists began using early talkboxes like “The Bag” and the “Heil” high-powered talkbox.  Superstars like Joe Walsh, Peter Frampton, and Pete Townshend made talkbox world-famous in the early 70’s.  Then in 1972 the legendary Stevie Wonder found it and used it with a keyboard on TV performances like Sesame Street and The David Frost Show.

Fast forward to 1980 and a new era of electronic music and synthesizers.  A young Roger Troutman and his family band Zapp created a song called “More Bounce To The Ounce” featuring a lead talkbox performance played with a Moog synthesizer.  This Bootsy Collins produced funk classic caught the world’s attention, and skyrocketed Zapp and Roger’s career.  Crowds were mesmerized by the magical and funky robotic vocals Roger was able to create, making a more human-feeling, more articulate talkbox performance than ever heard before with guitars.

It was used on many songs after that but Roger continued to wear the talkbox crown until his most well-known feature on Tupac and Dr. Dre’s “California Love”, where he interpolates the vocals from Ronnie Hudson’s “West Coast Poplock”.  Still to this day when someone asks what talkbox is, I generally reply… “You know that opening robot sound on California Love?” and immediately they realize that sound, without knowing how it’s really made.  Sadly, Roger was killed in 1999 due to a tragic dispute with his brother.  However his legacy continues, with every modern talkboxer attributing his classic work as their main influence.

Each talkboxer finds their own unique way of sounding, just like every human vocal is different.